What are the rules of crazy eights card game 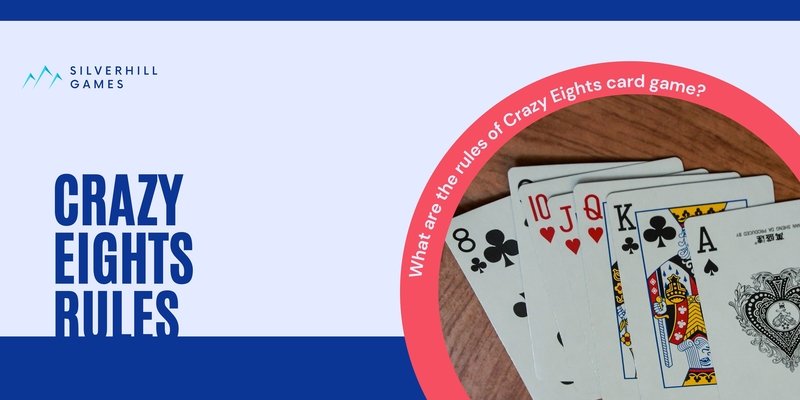 The object of the game is to have the fewest points and the object of each round is to be the first one to get rid of all the cards in your hand.

Remember to keep the joker cards out of the deck for this game.  They are not used in Crazy Eights.

A sheet of paper or pad will be required to keep track of each player’s score at the end of each round.

Alternatively, you can use a dedicated deck of cards for crazy eights.  For younger kids, aged between 2 and 8 tend to enjoy the different graphics compared to the standard playing cards.

Instead of using a spare piece of paper a dedicated score pad can be used.  A universal game scoring notepad can used on any card game or game for that matter.

This will help you keep organized so you don’t have to go hunting for a pad of paper every time you play a game that needs score tracking.

Each round the objective is to use all your cards.  The lowest overall score wins the entire game.  Getting rid of all your cards before everyone else means that you will have 0 and ends that round.  This forces all the other players to count all their remaining cards to their score tally.

The entire game is over once any player has reached or exceed the 100-score mark.  The winner is the person who has the lowest overall score.

Score is only added at the end of each round.  If you still have cards at the end of the round, then you need to add up the value for each card.  Not all cards are worth the same.  All face cards, jack, queen, and king are worth 10 each.  Any eight card, which are the highest card since they are wild, are worth 50.  All numbered cards are scored as numbered with aces worth 1 scored.

After each round each person’s score tally is recorded.  All round scores need to be added together to see if any player hits the 100-score mark.  This needs to be checked for each player.

At the beginning of the game an initial dealer needs to be selected.  This is where house rules can differ from place to place.  Traditionally spreading the entire deck face down and having each player select a card to see who has the lowest card, ace being the lowest.  With this method you would keep selecting if there is a tie until there is a winner of the lowest draw.  That person would be the starting dealer.

After each round the dealer role is moved clockwise to the person to the dealers left.

At the beginning of every round all the cards need to be shuffled thoroughly.  Once shuffled, every player is dealt their starting five cards face down in front of them.  Typically, one card is placed in front of each player moving around the table until all players receive their five cards.

The remaining cards are stacked in the middle of the table with the top card flipped over to start the game with a discard.

The flipped card sets the number to match and the suit.  There is only one rule during the initial setup that the dealer must follow and that is the first card cannot be an eight.  Since each eight card is a wildcard that doesn’t have a suit, it makes it hard to start with it.  The dealer needs to take that eight card and put it back into the deck and redraw a starting card.

The person to the left of the dealer will be the first to start playing.

On your turn a player must play a card to complete their turn.  The card played must meet one of the two rules, either matches the number/face or it must match the suit.  Playing a number or face card with a single deck will change the next suit that can be played.  This is the basics of the entire gameplay except for those crazy eights.  The eight cards are the highest number in this game and are a wildcard.  The suit of each eight can be ignored throughout the game, just think of them as four joker cards.

If someone cannot play anything in their hand that matches either the suit or the number/face card, then they must pickup a card.  They keep picking up until they can play.

When someone plays an eight, they must declare what the suit will be for the next turn.  That is of course as long it isn’t the last card played in the round.

There are a few ways to end each round.  The quickest way to end a round is to be the first person to use all their cards.  That is the simplest way to end a round.  If the draw deck has been used, then each player goes around until all players are unable to play.  If there are four people playing, this could mean that only three people continue to play, and the fourth person has to pass if they can’t play their card or cards.

To quickly recap the card played must match the previous laid card in either suit or number / face.  The eight cards are the only ones that can avoid this rule.  The round ends when someone uses all their cards, or everyone has come to a stall and can’t play anymore.  When someone hits the 100-score limit then overall winner has the lowest total score from all combined rounds.

The eight cards are very powerful and can be used to force a change in suits when you want to.  Some people keep the eight as their last card to guarantee that they can play and don’t use it until the end.  Keep in mind that the other players might use their eights to try and control the suits being played.  Not playing your wildcard eight might allow other players to finish their hands before yours.  It’s a risk you will have to take if you want to play that way.

New membership are not allowed.